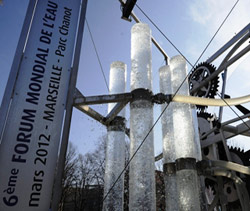 March was noted for the Water Forum held in Marseilles. The goal of this event was to discuss sanitation and water supply issues which are currently raising concern virtually in all countries of the world.

400 meetings were held within the framework of the Forum and they were attended by more than a dozen of heads of states and nearly one hundred ministers, international organizations and delegations. Almost 35 thousand persons from different parts of the world came to Marseilles for the time of the Forum.

According to statistical data announced during this event, over two milliard persons live without sewerage. Settlements located in Sahara use contaminated water which is dangerous for human health and life. This is the reason why Africa countries account for 80% of cholera incidence. During the Forum it was also announced that even residents of Europe suffer from water shortage.

Technological processes that occur in the majority of industrial enterprises require large volumes of water for technical purposes. In some cases connecting the facilities to the centralized water infrastructure is downrigh impossible.

Well drilling services are gaining an increasing attention nowadays resulting from dynamic development of suburbian areas. This is considered the most effective and simple means for providing your land lot with the necessary equipment.

AquaGeo Holding is offering services in designing industrial facilities of any level of complexity. Our company’s team consists of skilled professionals capable of…

Water distribution for a private house is an open issue for a majority of landowners. Some land lots have access onty to irregullar water supply, while certain areas don’t have any centralized water infrastructure available at all.

I would like to thank AquaGeo Holding Company very much for all the works which they performed on my land. When I bought the house, there was nothing ...

Eventually, we bought some land near Moscow like it was our long-cherished dream but we faced the problem which we did not notice at first. It's awful...

Hello, my name is Sergey Petrovich, I am the owner of a small recreation-purpose property. This is my business and the main source of income.

Thank you very much for your professionalism and good attitude. AquaGeo Holding company are real magicians for people who do not know much about const...

I cooperate with AquaGeo Holding since 2005 and I can say that today it is my major partner and companion. I know for sure that I can contact Geospets...
All reviews

It is not commonly known but March 22 is the world water day. This date is not widely celebrated or popular, although water supply is a matt...

National researches and scientists have been involved in development of Antarctica's territory for a long time. Recently they successfully c...

March was noted for the Water Forum held in Marseilles. The goal of this event was to discuss sanitation and water supply issues which are c...

Along with prompt and high-quality services, our Company offers attractive discounts.

Discounts apply to all services and equipment offered by the Company. We give a free-of-charge customer card entitling to progressive discount of 3, 5 and 10% to each customer who contacts our Company and signs a contract or several contracts with us.